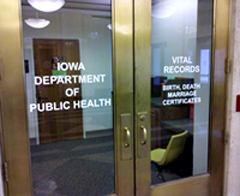 Health officials are hoping this year’s flu vaccine is more effective than the batch brewed last year. Many Iowans who got the flu shot last year still got sick because the vaccine didn’t cover a surprise strain.

Iowa Department of Public Health Medical Director Patricia Quinlisk says the vaccine is still the best way to protect yourself against the flu.

“The bottom line is, even if it’s not a really good match, it will still give you some protection and will give you protection for the other viruses that could be spreading…because you actually get vaccinated against three or four different strains of flu,” Quinlisk says.

This year’s vaccine contains protection against the harsh Type A strain that hit last year and other strains that are considered most likely to spread. The elderly are more susceptible to influenza than other populations and there’s a “high dose” version of this year’s vaccine that’s recommended for seniors.

Quinlisk says one of the best ways to protect older Iowans from the flu is to make sure children are vaccinated. “They’re the ones that spread it around the most and apparently they’re the ones that bring it to grandpa and grandma and get them sick,” Quinlisk said. There are a few different options for getting the vaccine, aside from the traditional needle in the shoulder. “There’s one kind that’s a very small, little tiny needle and just basically puts it a little bit into your skin and there’s also one that you spray into your nose. It doesn’t even involve a needle,” Quinlisk says.

The Centers for Disease Control report on average, influenza kills 24,000 people a year in the U.S., but less than half of Americans get an annual flu immunization. It’s recommended for anyone 6 months and older.