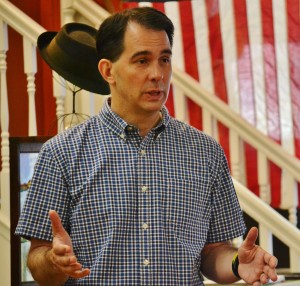 Republican presidential candidate Scott Walker is addressing his sliding poll numbers in Iowa and elsewhere with a re-set of his campaign schedule.

“We’re doubling-down in Iowa,” Walker told Radio Iowa during a telephone interview. “We have to do well in Iowa.”

The February 1 Iowa Caucuses are the kick-off contest of the 2016 presidential campaign. Walker has so far made stops in 30 of Iowa’s 99 counties and he wants to wrap up that statewide tour to all 99 counties as quickly as possible.

“We just announced this week 99 county chairs and we’re going to get right down to 1600 precinct chairs,” Walker said, “because we understand that grassroots organization ultimately makes the difference in the Iowa Caucuses.”

Walker vaulted to the top of the polls in Iowa after a break-out performance at Steve King’s Freedom Summit in January. But Walker was an infrequent visitor to the state in the months that followed. He didn’t become an “official” candidate until July. Now, with about four and a half months left in the Iowa Caucus campaign, Walker is betting the farm on a strong finish here.

“Early state voters aren’t just looking at TV ads. They’re not just looking at national media coverage. What they’re looking for and what I’ve heard when I’ve been in Iowa is they want to know what are your plans, what are the details and are you going to spend the time necessary to talk to voters,” Walker said. “We’re absolutely vested in that. We’re going to do that and we think that’s the key to winning.”

Walker and his campaign manager held a conference call Thursday to reassure about 80 key donors that adjustments were being made to the campaign. A few hours later, Walker talked by phone with Radio Iowa as he walked through O’Hare Airport, making his way back to the Midwest after Wednesday night’s debate in California.

“We’ve got a plan to wreak havoc on Washington and we’ve got the backbone and experience to do it,” Walker said when asked about the call.

Candidates like Donald Trump and Carly Fiorina seem to appeal to grassroots Republican voters who are angry with the party’s establishment for failing to follow through on campaign promises of the past. According to Walker, though, voters are motivated by a “sense of urgency” rather than anger.

“They want politicians, they want candidates who listen to what they say and are willing to act on it, not just say the right things, but also have the capacity to act on it,” Walker said. “I think what gives us strength in this race is nobody has to wonder what we’d do when we take on Washington.”

And Walker points to the budget cuts he enacted as Wisconsin’s governor and the laws he signed that rolled back collective bargaining rights as examples of the kind of proposals he’d push as president. Walker said now, once a week, he’ll be releasing detailed policy statements on a variety of issues — and his tax cut plan is coming soon.