You are here: Home / Agriculture / Agronomist sees optimism as farmers prepare for harvest 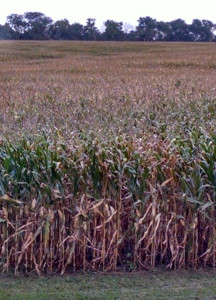 A corn field in eastern Iowa.

Fall arrives this week and its arrival signals the start of the harvest season on the state. Iowa State University extension agronomist Mark Licht says everything leading up to the harvest has gone pretty well. “We’ve had I’ll say a pretty consistent, near ideal growing season. The only thing that could have maybe been better is a little bit warmer temperatures in the first half of the growing season,” Licht says.

He says most farmers will climb into the combine with confidence about what they’ll see in the field. “Generally speaking, most people are looking pretty optimistic going into harvest,” Licht says. “Yield expectations are pretty good for a majority of the state. Maybe some of the exceptions are really in southern Iowa, south of I-80.” Licht says wet weather caused the majority of the concerns in southern Iowa.

“For the most part they got the corn planted on time, but it created some challenges getting some of their other field operations done,” according to Licht. “Where as you go over by southeast Iowa they seemed to be getting some of those heavier after they got through that planting season. By and large, south of I-80, they’ve struggled and they’ve not had an opportunity for those soils to really dry out.”

Dry conditions had some impact in the northern half of the state, but maybe not as much as the rain did in the south. He says some of his colleagues in northwest Iowa said they started to see things dry out and they would then get some rain. Licht says there were some dry times in northeast Iowa too this summer, and their yields may be a little lower because of those drier conditions. There was a stretch of unseasonably cool weather recently where temperatures dropped into the 50s in the evening, and Licht say that could have some impact.

“I think we did have some crop stress later in the season which in my estimation means that we are going to be pulling back some of those kernel weights, test weights potentially,” Licht says. He says those lower weights could mean some slower dry down in the fields. Weather may still cause some problems before all the crops are in because of development issues brought on by cooler weather. Licht says standability could be a problem in some cases, and heavy winds could knock down the plants and hurt yields. Licht says the soybean crop appears to be in good shape and combines could start bringing them in soon too.

“They are probably real close to that normal maturing time frame and we’ll really start seeing soybeans being harvested,” Licht says. Licht says its best to have the crops reach maturity before the first frost, which usually happens at the end of September or early October.