You are here: Home / Agriculture / State Forest Nursery to stay open for now 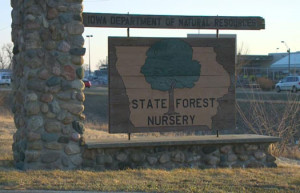 The State Forest Nursery in Ames is winning a reprieve and will remain open for business, at least through next spring.

District forester Mark Vitosh says a decreasing demand for seedlings had the facility on the Iowa Department of Natural Resources’ chopping block.

“There was some concern that it might have to shut down,” Vitosh says. “For now, we will be shipping for this fall, the 2015 fall season, and we’re taking orders for the 2016 spring season.”

Last fall, the 98-acre nursery filled orders for more than one-million seedlings statewide, however, it’s been losing money due to declining seedling orders since 2007.

Vitosh says, “We’re continuing to try to make changes and do other things to try to keep the doors open and to continue to supply a great resource of native shrubs and trees to the folks in Iowa.” The nursery was created in the late 1930s by President Roosevelt as part of the Civilian Conservation Corps.