You are here: Home / Agriculture / State Patrol asks motorists to use caution as harvest gets underway 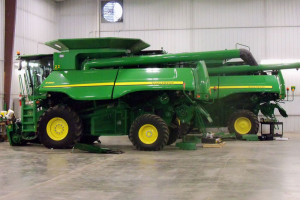 Large farm equipment will come out of the shed and onto roadways as the harvest gets underway.

The Iowa State Patrol is reminding motorists that the fall harvest is getting underway.

“This time of year, you need to watch for those large trucks, tractors and implements. It can be anything from a small tractor to a large, 24 row bean head combine,” Sergeant Nate Ludwig says.

Even if a farmer waves you around, Ludwig says it’s best to wait until you can actually see that it’s safe to pass. He also urges drivers to be patient and avoid passing farm equipment in no passing zones. Ludwig says not only is that dangerous, it’s against the law. “If can’t make a complete pass from start to finish before that solid yellow line, that’s illegal,” Ludwig says.

The harvest season can run 24 hours a day, so Ludwig warns huge equipment can be moving between fields at night. He says farmers need to share responsibility by making sure it’s obvious when they’re going to turn or come to a sudden stop.

(Thanks to Iowa Public Radio)