Democratic presidential candidate Hillary Clinton held a forum in the gym of a Des Moines elementary school today to talk about her plan that she says would cut the high cost of prescription drugs. But Clinton got onto the topic of the Keystone XL pipeline while taking questions, and for the first time announced she is against it.

Clinton said as a former Secretary of State she waited to see what the President and current Secretary of State did about the pipeline before she expressed an opinion. “So I thought this would be decided by now, and therefore I could tell you whether I agreed or disagreed,” Clinton said. ” I feel now I’ve got a responsibility to you and other voters who asked me about this.”

Clinton went on to explain her stand to the Drake student who asked the question about the pipeline.

“It is imperative that we look at the Keystone Pipeline as what I believe it is — a distraction from the important work that we have to do to combat climate change — and unfortunately from my perspective, one that interferes with our ability to move forward to deal with all the other issues. Therefore I oppose it,” Clinton said.

Clinton said current pipelines leak and cause problems and that’s part of why she is against it.

“I don’t think it is in the best interest of what we need to do to combat climate change,” Clinton said. “I will be rolling out in a few days my plan for a North American approach to fighting climate change and clean energy.” 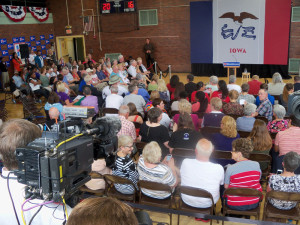 Participants in a forum wait for Hillary Clinton to arrive.

Clinton’s discussion on climate change ironically came after she started the forum 40 minutes late, which left the participants waiting in the small Moulton Elementary School gym sweating with no air conditioning and looking for a way to cool off.

Once she started her prepared remarks, Clinton talked about the high cost of prescription drugs. Clinton said she wants to eliminate corporate write-offs for direct-to-consumer drug company advertising and put the money into a tax credit for companies to conduct research and develop new drugs.

Clinton would require drug companies that benefit from taxpayer support to invest in research, and she said while some are worried her approach would hurt new drug development, she believes it would do the opposite.

“I won’t to both protect consumers and promote innovation, while putting an end to profiteering. We can achieve a win-win for families, businesses and America,” Clinton said.

Clinton spoke for around 25 minutes before taking questions from participants. She took a shot at Republican Governor Terry Branstad when asked about funding for mental health care. “We are still not providing the resources and insurance companies are not doing what they should to pay for people to get mental health,” Clinton said. “And your governor vetoed a bipartisan agreement that would have kept two of your four mental health facilities open and started moving people into nursing homes or basically discharging them. Three people have died because of that decision. That’s wrong, absolutely wrong.”

Clinton was referencing the veto by the governor of a legislative plan to keep the Mental Health Institutes in Clarinda and Mount Pleasant open. The state’s largest employees union is suing the governor over the decision. Governor Branstad has said his top priority is ensuring Iowa’s mental health patients have access to modern mental health care delivered in accredited facilities and that’s why he chose to close the Clarinda and Mt. Plesant facilities.