One of the dogs rescued in Humboldt County.

Nearly one dozen neglected dogs are now being cared for in Des Moines after the animals were seized from a home in northern Iowa’s Humboldt County. The Animal Rescue League of Iowa was called to a home near Luverne last Wednesday by the Law Enforcement Center of Humboldt.

Dispatchers say someone complained about several dogs that were loose and attacking livestock. Rescue League officials found ten dogs on the property, some of them in cages. 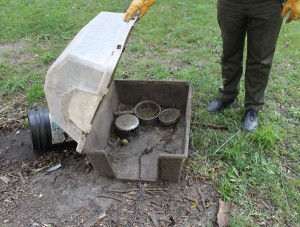 Box where dogs were kept.

Officials say the hunting-type dogs ranged in condition from normal to emaciated. Sheriff Dean Kruger says the owner of the dogs is 45-year-old Timothy Broesder. He’s being charged with ten counts of animal neglect.