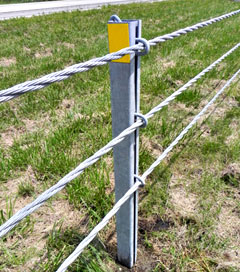 The Institute for Transportation is studying the effectiveness of cable barriers along Iowa interstates.

The Institute for Transportation (InTrans) at Iowa State University has launched a two-year study of the effectiveness of the cable barriers placed in the medians of Iowa interstates. Chris Poole is a safety programs engineer with the Iowa Department of Transportation.

“Before that big installation year of 2011, we averaged approximately 16 or 17 cross median fatalities per year,” Poole said. “Since 2011, that average per year is down to around six-and-a-half.”

Most of the median cable barriers are located on I-80 between Des Moines to Davenport and I-380 from Coralville to Cedar Rapids. There are plans to add more of the barriers in the coming years in sections of western and northern Iowa. Federal safety funds are covering much of the installation costs.

“On average, it costs about $120,00 per mile. That’s about one-tenth the cost of installing concrete barriers,” Poole said. “Currently, our plans are to continue installing these barriers at the rate of approximately 20 miles per year.” The barriers are designed to be flexible and “absorb” the impact of a crash, according to Poole, and prevent the most serious kinds of crashes — head-on collisions.

The Iowa DOT is paying ISU’s InTrans $150,000 to study the effectiveness of the barriers, both in terms of safety and the cost of installation and ongoing repairs.