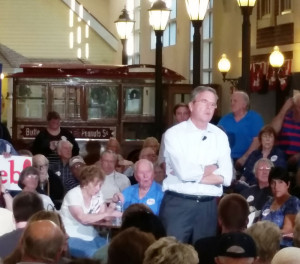 Republican candidate Jeb Bush says he wants to be a president who’ll “disrupt the old order” and that includes scaling back scores of federal regulations.

“The animal spirits of this country are being stifled by this top down driven regulatory system that is choking off the next generation of job creators,” Bush says.

About 100 people gathered inside a Cedar Falls diner early Tuesday morning to hear from Bush. He told the crowd it is not in his DNA to be the “loudest voice” on the campaign trail or on the debate stage.

“I’m not running as though this is kind of a show. It’s not about me. It’s not about anybody on the stage although I’m sure and I hope it was entertaining for all of you,” Bush said, to laughter. “I mean, it’s good to have good humor about all of this, but this mission is not about the candidates running.”

Bush said he prefers to focus on the power of his ideas for the future rather than talk about how bad things are in the country.