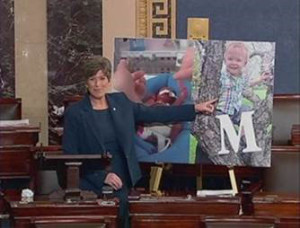 Senator Joni Ernst on floor of U.S. Senate with picture of Micah Pickering.

Iowa Senator Joni Ernst says she’s “deeply disappointed” legislation that would prohibit almost all abortions after the fifth month of pregnancy was rejected in the U.S. Senate Tuesday.

Ernst and other supporters of the House-passed “Pain-Capable Unborn Child Protection Act” claim 20 weeks into a pregnancy marks a point when unborn babies can feel pain and survive if born prematurely.

“The United States is currently only one of seven countries in the world that allows abortions after five months,” Ernst told Iowa reporters in a conference call after the Senate vote. “We are in the same company as China and North Korea.” The bill needed 60 votes to advance in the Senate. It received the support of 54 Senators, with 42 in opposition.

On Monday night, Ernst took to the floor of the U.S. Senate and was joined by Clayton and Danielle Pickering of Newton and their three-year-old son Micah. Micah was born prematurely at five months. “As Micah proves, babies at five months can survive outside of the womb,” Ernst said Tuesday. “As a mother and a grandmother, I remain committed to urging my colleagues not to deny these babies the right to life.” Three Senate Democrats supported the bill, while just two Republicans voted against it.

Democrats have blasted Republicans over scheduling a vote on an abortion-related bill on the week that Pope Francis visits Capitol Hill and at a time when the House and Senate are trying to negotiate a government funding measure to avoid a shutdown. Many Republicans in the House have vowed to reject a bill to keep the government operating unless it excludes money for Planned Parenthood.