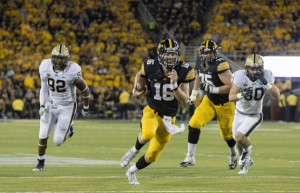 C.J. Beathard has always been known for having a strong arm but it is his ability to run that has been a major factor in Iowa’s 3-0 start. The junior quarterback is averaging five and a half yards per carry and his three scrambles were a big part of the Hawkeyes’ winning drive against Pitt. None of them were by design.

“A lot of it is instinct”, said Beathard. “I don’t think we had any design quarterback run plays against Pitt and a lot of those were scrambles. I saw a hole and the protection was breaking down and I thought I could make a play.”

Sophomore right tackle Ike Boettger says the line is working to provide Beathard more time to throw to cut down on the number of times he runs it.

“Those are the things we are trying to fix”, said Boettger. “That is nice that he can get out of there but in a perfect situation he should be able to sit in the pocket and do whatever he needs to do.”

The Hawkeyes look to move to 4-0 Saturday afternoon by hosting North Texas.