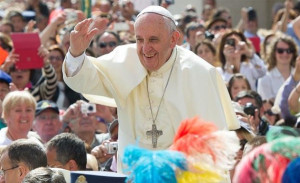 A photo of the Pope from his Twitter feed.

Senator Chuck Grassley tweeted his thoughts shortly after Pope Francis finished speaking in Washington, D.C. this morning. Grassley said it was great to be part of the “historic event” and Grassley said the pope’s message was “well-received” by congress.

All six members of Iowa’s congressional were there in the U.S. House as the pope spoke. Republican Congressman Steve King of Kiron said he has never seen the members of congress so “utterly silent” as they focused on the pope’s message.

“I thought it was a unifying speech and it’s a good thing for our country and I think we’ll parse his words for a long time to come,” King told Radio Iowa. “But it was a great experience to be there.”

Democratic Congressman Dave Loebsack of Iowa City said everyone was “on their best behavior.”

“A little bit of progress was made today in the U.S. congress because of the presence of this pope and because of his message of increased conversation,” Loebsack told Radio Iowa.

The pope spoke at length about immigration. Congressman King is an outspoken opponent of what he calls “amnesty” for undocumented immigrants. King said “everyone expected” the message Pope Francis delivered on that topic and on the others he addressed.

“It was a broad speech. It was inclusive,” King said. “It was designed not to divide, not to create division, but to unify.”

Loebsack was moved by the pope’s message about social justice.

“That we do everything for those who are the most down-trodden, making sure that everyone’s full lights, as he said, are realized,” Loebsack said. “Those are just themes that I think have been important throughout American history and are important to this day.”

King was struck by a phrase Pope Francis used in the middle of the speech.

While the pope didn’t use the word “civility’ in his speech, Loebsack said that’s what the pope inspired today.

“We had at least a 45 minute period of that in that chamber,” Loebsack said. “And I’m hopeful that we can have more of that moving forward.”

Congressman David Young, a Republican from Van Meter, said it’s too bad House and Senate members didn’t immediately start debating some of the issues the pope touched on.

“It would be really nice if we could have been trapped in there,” Young told Radio Iowa early this afternoon. “The essence and ambience that we felt while listening to the pope, with that spirit of unity, I hope it sticks around for a while because we could use it.”

No pope has ever addressed a joint session of congress and Young, who is a rookie congressman, said he was honored “to be part of history.”

“I liked the message,” Young said. “I liked how he was deliberate and soft-spoken, very respectful, but to the point at the same time.”

“And he said it won’t necessarily be easy and there will be tough decisions, but we’re a nation, when we are unified, that has faced dire situations before and we’ve always risen to the challenge,” Young said, “and we need to do that again, for the good.”

Congressman Rod Blum, a Republican from Dubuque, is also in his first term in congress and he described today as “exciting” and “exhilarating”.

“I never dreamed that I’d be in the same room as the pope,” Blum said.

Blum also used the word “unifying” to describe the pope’s message, but Blum expects the effect to evaporate rather quickly.

“Washington, D.C….is uber partisan,” Blum told Radio Iowa this afternoon. “…Though today everyone is uplifted and in a great good, in a great spirit. It’s wonderful. It’d be nice if it was this way every day.” 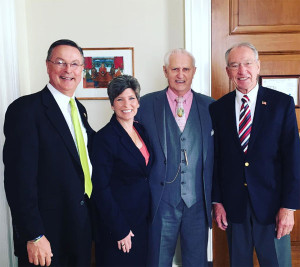 Blum gave his extra ticket to a seat in the House gallery to Max Ortner of Waterloo. Blum asked the more than 100 Catholic churches in the first congressional district to submit the names of lay people who’ve been valuable church volunteers and Ortner won a drawing for the ticket to see the pope in person.

“He’s delivered communion to over 85,000 shut-ins over the last 35 years, so very well deserved. He did all this volunteer work for the church over the years expecting nothing but the grace of God in return,” Blum said. “…He says it feels like a dream that he was in the same room with the pope.”

Blum paid for Ortner’s trip and the two flew from Iowa to D.C. together.

“He doesn’t have a cell phone and we didn’t want him to get lost in the airport,” Blum said. “But just to hear his story, you know, a 54-year marriage to his wife, Patty, who passed away four years ago and just his reverence that he has for the pope and the Catholic Church, it’s really special.”

Having Ortner around took today’s experience to a whole other level, according to Blum.

“I’d be excited anyway, but this made it really special for me, just to listen to Max and to see it in his eyes,” Blum said.

Ortner is flying back to Waterloo this afternoon. His 81st birthday is tomorrow. Before he left, Blum introduced Ortner to Senator Grassley, who celebrated his 82nd birthday this month, and Senator Joni Ernst.

Ernst, a Republican from Red Oak, issued a written statement this morning shortly after the pope’s address to congress.

“Pope Francis’s visit reminds all of us that we each play a role in showing compassion for and improving the lives of those in need. As a person of faith, I appreciate the goal of identifying those struggling and working to find ways to lift them up,” Ernst said. “While we may not always agree on the right approach, I truly believe that we can all work together—across party lines and across faiths—to ensure the challenges we face are met head on.”

Nearly 17 percent of Iowans identify themselves as Catholics. Twenty-two percent of adults in the U.S. are practicing Catholics.