You are here: Home / Agriculture / Survey finds another drop in farm land values 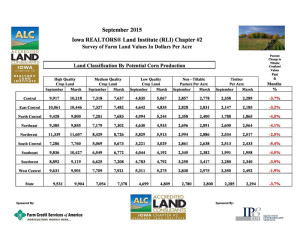 A new survey shows a drop in farmland values in Iowa. Kyle Hansen is a land consultant with the Iowa Chapter of Realtors Land Institute. “We saw a three-point-seven percent decrease for tillable land across the state of Iowa,” Hansen says.

He says the group’s March survey showed a seven-point-six percent decrease in land values, so the over decrease from September of 2014 to September this year is 11-point-three-percent. Hansen says the drop in the price of corn and beans has impacted land values.”That is one of the bigger factors that we look at. Obviously with lower commodity prices, it also correlates to the net revenue that the farmers are able to receive for their crops and their farming operation — which ultimately follows through to the land prices,” according to Hansen.

There are some other issues that impact land values as well. “Potential increases in interest rates, high input costs,” Hansen says. “Even though net revenue has come down, the cost for the inputs has remained very strong and very high. So, those are the top other factors that would contribute to the decrease.” Hansen says the drop is not a surprise given the economic conditions in agriculture.

“We understand the dynamics of the net revenue that the farmers are able to receive, and this is pretty much an anticipated downward move,” he says. Hansen says the yields in the upcoming harvest will play a role in whether values will drop again in the next survey. “I think the land market will follow whatever the commodity prices do. If they stay steady, we could see some stabilization in our prices,” Hansen says.

The dollar drop in land values for each acre in the September survey depends on the quality of ground and region of the state. The most expensive high quality ground in northwest Iowa for example, dropped $268 from $11,607 in March to $11,339 in this survey. The least expensive high quality cropland in south central Iowa dropped $474 from $7,760 in March, to $7,286 in September.

The full survey summary is available at: www.rlifarmandranch.com.