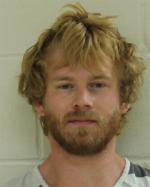 A Belmond man faces charges after he tried to flee from authorities and later crashed into oncoming traffic on the Avenue of the Saints near Clear Lake on Wednesday afternoon. The Iowa State Patrol says 23-year-old Robert Summers drove off when a trooper tried to stop his car in Mason City.

The vehicle then went west from Mason City on the Avenue of the Saints, running over stop sticks placed down by an officer, with the car then intentionally driving through the median into the eastbound lanes. The car then struck a semi near the driver’s side door, ripping off the rig’s fuel tank. The vehicle landed back in the median.

Summers was charged with eluding, speeding at 100 miles-an-hour in a 65 mile-an-hour zone, driving while barred, driving while suspended, and driving on the wrong side of a highway.

He’s also being held on Wright County warrants of first-degree theft and possession with the intent to manufacture illegal mushrooms. He’s being held on a total of $22,000 bond.