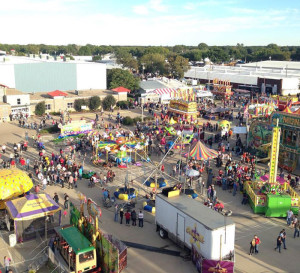 The midway at the Clay County Fair.

A number of records were set this month at the state’s largest county fair in northwest Iowa. Clay County Fair general manager Jeremy Parsons says total attendance for the 9-day event topped 330,000 for only the second time in the fair’s 98-year history, while two single-day attendance records were set the final weekend.

“People came to the fair, enjoyed the fair, and spent money,” Parsons said. “What we also saw was longer stays and I think that’s probably the goal we need to move toward.” Fairgoers spent a record amount just shy of $2 million on food and beverages this year. “For the 14 local nonprofits, that means more money probably than ever for them to spend back in the local community,” Parson said.

More than 25,000 people attended shows at the Clay County Fair’s grandstand, including a sellout crowd for the band Little Big Town, the first sold-out show at the fair since Alan Jackson in 2011. One grandstand show, the World of Outlaws, was canceled due to rain. GoldStar Amusements on the Midway establish a fair record for gross sales for the fifth consecutive year, as well as setting an all-time single-day record last Saturday.

A new mark was also set in 4-H and FFA competitions with exhibitors from 46 counties in three states exhibiting. The 2016 Clay County Fair, which is billed as “The World’s Greatest County Fair,” will be held September 10-18.