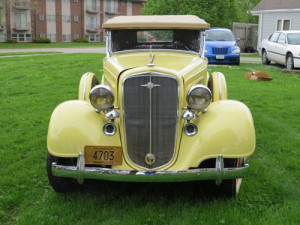 A central Iowa man’s collection of rare cars will be up for auction Saturday at the Central Iowa Expo grounds east of Boone. Grant Quam of Ames died in October of 2007 at the age of 91 and Quam’s son Jerry, who lives in Dallas, Texas, says its time to sell the vehicles.

“They range from what we considered barn cars, projects cars that people maybe will restore to kind of cars more in the 50’s, 60’s kind of range,” Quam says. He says there are also some “high-end” cars. “The cars he collected…are really from the teens 20s and 30s, is most of his collection.” Quam says his dad had an eye for unusual cars. “He collected what he like to refer to as orphan cars. Cars you don’t see every day,” according to Quam. He says there are several cars drawing interest from collectors.

There’s the 1925 Kissel Gold Bug Speedster which is an open car with a rumble seat and V8 engine. Also the 1936 Graham, 1937 Lasalle, and a 1936 Pierce Arrow Country Club Roadster, which he says is a very rare car. Quam says his dad began with nothing and built from there. “He was a self-made guy from the depression. He started out basically opening a shop in Ames in 1945 — kind of a one-man auto shop — so that’s how he got this going. And that’s how he found out about a lot of leads on some of the cars in the early days,” Quam says. He says his dad later moved into real estate and made money there. The sale begins at 10 a-m and is expected to draw a large crowd of car enthusiasts from across the country and the world.

You can find our more about the cars at: www.vanderbrinkauctions.com.