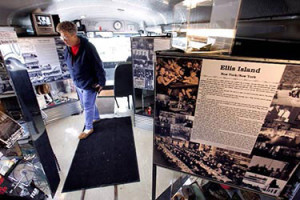 An Iowa historian is launching a tour today that will eventually stop in all 99 of the state’s counties in a rolling museum aboard a bus, what he calls a “buseum.” Michael Luick-Thrams has created the exhibit, called “At Home in the Heartland, How We Became Us.”

“We look at the pattern of settlement of the early years in Iowa history, who came when, what did they do, what were the influences of that,” Luick-Thrams says. “We look at the role of education, of government, of religion, families and how those roles changed over time. We look at work, leisure, communication, transportation.”

The project involved years of research, he says, and dozens of interviews. “Our era that we focused on is 1830 to 1930 because that sort of set the stage for the Iowa that became the place we grew up in and still live in,” Luick-Thrams says. “But it’s not only family history. It’s sort of a mixture. We use the family history component as sort of the entree into the larger story.”

The buseum is starting its statewide tour in Belmond, with stops in Webster City on Saturday, Boone on Sunday, and next week, hitting Ames, Des Moines, Marshalltown, Newton, Albion, State Center and more. See the full tour schedule at: roots.traces.org.