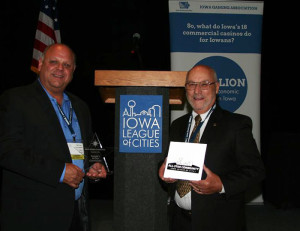 Four communities in the state are being recognized for their outstanding work in launching programs to make themselves shine.

Newton city management analyst Natalie Umsted says Newton was set aside with its own award, while Elkader, Sheldon and Waterloo were named as All-Star Communities by the Iowa League of Cities.

“Those communities are recognized for innovative efforts in areas such as urban renewal, development, preservation, collaborative efforts or quality of life improvements,” Umstead says. “The People’s All-Star Community is selected based on votes that the public gave to different projects, so Newton is the only community to be selected as the People’s All-Star Community.”

After being chosen by a panel of judges, Newton was among ten communities to compete in the head-to-head, bracket-style competition on Facebook. Umsted notes this is Newton’s second statewide award in recent months. “Earlier this year, the ‘Get to Know Newton’ program was recognized as Program of the Year by the Iowa City Managers Association.”

That “Get to Know Newton” community outreach project was launched in 2014 and helped tell Newton’s story of resurgence following the departure of Maytag. Newton’s population and employment levels are now approximately the same as when Maytag was an employer.