You are here: Home / Education / Students at Vinton-Shellsburg protest over Confederate flag 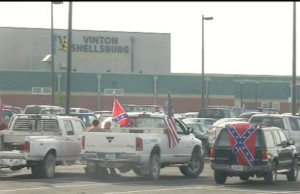 Confederate flags on vehicles in the Vinton-Shellsburg parking lot.

One day after the Vinton-Shellsburg High School sent home a student for flying a Confederate flag in his truck, dozens of students showed up at school with Confederate flags to protest.

Junior Hunter Gray says the school sent him home Thursday when he refused to take down the flag. Gray says he sees the flag as a symbol of heritage, not racism, and says he wants to change the public perception of the flag.

“We want to show it’s not to be racist or anything. It’s respect,” Kimm says. Kimm says the school told the students they could lose parking privileges or have their vehicle towed if they continue to fly the Confederate flags on school grounds. Students at first said they would not move the cars, but then moved them to side streets.

Vinton-Shellsburg Superintendent Mary Jo Hainstock said the flag is a distraction that has sharply divided the student body, which is why the school asked Gray to take it down. There is no specific policy at the district banning the flag.