You are here: Home / News / Christie says government shutdown is a ‘ridiculous’ idea 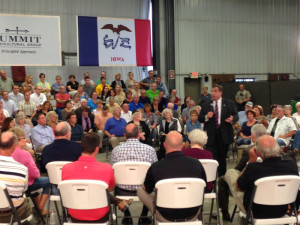 Chris Christie speaks during an event in Alden.

Republican candidate Chris Christie tonight said it’s time for term limits to clean out the “failed” congress and he’s promising to be a Republican president who’s willing to strike deals with Democrats when necessary.

Christie, who has served as New Jersey’s governor for the past six years, spoke to more than 150 people tonight at a town hall meeting in Alden. Gary Hillmer of nearby Eldora asked Christie how he’d “build consensus” in Washington, D.C.

“Politics has become so divisive and acrid that it’s gridlock,” Hillmer said. “I’m sick of it. Most people are.”

Christie told Hillmer there is “no substitute” for relationship building and that’s what he’s done with Democratic leaders in New Jersey’s legislature.

“Sometimes there are certain things you just can’t work out and you have to let elections solve, but that’s got to be the exception, not the rule,” Christie said. “In Washington, now, it’s the rule.”

Christie laid the blame on both Republicans and Democrats in congress and he said parents wouldn’t let their children act the way politicians in Washington are acting these days.

After the 90-minute event concluded, Hillmer said he was pleased with the “comprehensive answer” he got from Christie.

“That’s how the government should work,” Hillmer said, “compromise and consensus.”

Jan Reisetter of Radcliffe, another member of the audience, is also concerned about gridlock.

“I thought he was positive in his message and he seemed truthful, believable,” she said.

Reisetter, though, is “still in the thinking stages” and hasn’t picked a candidate yet.

Agribusinessman Bruce Rastetter hosted Christie in the warehouse of his company’s corporate headquarters in Alden.

“His blunt, direct style I think fits well with Iowans,” Rastetter said during a brief introduction.

Rastetter is expected to announce his support of Christie at a news conference in Des Moines Tuesday morning. Rastetter was among a group of major GOP donors who flew to New Jersey in 2011 to encourage Christie to run for president in 2012.