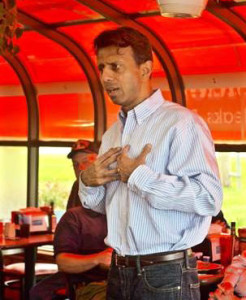 When September ends, Republican presidential candidate Bobby Jindal will have made 18 public campaign appearances in Iowa, by far the most of any candidate.

Jindal has about 3 percent support in Iowa according to recent polls, but Jindal hasn’t fared well in national polls and he’s not been invited onto the prime time debate stage.

Jindal has become increasingly critical of Trump, the Republican frontrunner, over the past month. Earlier this month Jindal began calling Trump a narcissist and today Jindal’s campaign released a video mash-up of Trump comments and it concludes with a line comedian Will Ferrell delivered in a 2001 movie.

That’s a line from the movie Zoolander. Jindal ridicules the tax plan Trump released today. Jindal is also suggesting Trump’s proposed reform of the nation’s health care system should be called “Trumpcare” because it’s “socialized medicine” and “government dependence for all.”

Trump talked about how to ensure all Americans have health care coverage during an interview that aired on “60 Minutes” Sunday night.