You are here: Home / News / ‘Compromise is not capitulation,’ Chris Christie says 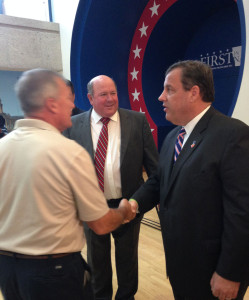 A handful of top Iowa GOP donors formally endorsed Republican presidential candidate Chris Christie this morning. Bruce Rastetter, an agribusinessman who has been Governor Branstad’s number one contributor, encouraged Christie to run in 2012.

“We encouraged him to run for president because we believed he had a bold leadership style, he had conviction and principle and he would make a great president and so as we think about four years later and today’s cycle, all those same things hold even more true,” Rastetter said.

Christie told Rastetter and the four dozen others on hand for the announcement that it’s now “time to get to work” to unite Republicans and convince people in the GOP that “compromise is not capitulation.”

“Our founders came up with a unique and ingenious design and the very design of our governmental system was to force compromise,” Christie said.

During a question-and-answer session with reporters, Christie said he won’t compromise on core principles like taxes and opposition to abortion.

“But there are lots of places where you can work with each other and compromise,” Christie said. “But you need to lay out: ‘Here are the principled positions I have that I cannot compromise on and then here’s the other area, which is always much broader, of where we can work together and try to make things work for each other’ and I don’t think it’s going to be hard to convince our party of that. I think our party understands it and for those who don’t understand it, they’re part of the problem, not part of the solution.”

“I don’t like compromise either, but I think everybody knows in politics there’d better be some compromises or nothing’s going to get done,” Elwell said during an interview, “as we’re seeing right now.”

Elwell also encouraged Christie to run four years ago and Elwell said the “good news” is Christie “is more deliberate” after serving six years as governor of New Jersey.