You are here: Home / Education / ‘No comment’ from Rastetter regarding call for his resignation 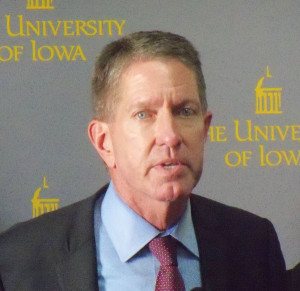 The president of the Board of Regents says his official response to a call for his resignation is “no comment.”

The Liberal Arts and Sciences faculty at the University of Iowa passed a resolution calling for all nine members of the Board of Regents to resign, an expression of their dissatisfaction with the hiring of a businessman to be the university’s next president. Bruce Rastetter, the president of the Board of Regents, is not resigning.

“Our official reaction is no comment and we appreciate that they have the right to say and do whatever they want to do,” Rastetter says.

The resolution from the University of Iowa Liberal Arts faculty also called for the dismissal of Rastetter and thr rest of the Board of Regents, something Governor Terry Branstad said yesterday that he does not have the authority to do. Today, Rastetter says the Regents “are going to support the university” and its new president.

“I really appreciate all the positive comments we’ve heard from Iowa faculty members about the choice we made for president and our interest in improving the university and not accepting the status quo,” Rastetter said today. “I heard it again Saturday at the football game. There are literally hundreds of faculty members out there who are supportive and there’s obviously a few that are upset and we get that, but we’re more interested in moving the university forward in a positive way, working with the new president, and that’s what’s going to happen.”