You are here: Home / News / TouchPlay ban of 2006 impacting Iowa Lottery’s use of new technology 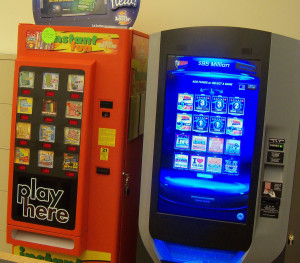 One of the most controversial issues in the history of the Iowa Lottery is having an impact on the agency as it plans to move ahead with modernizing its vending machines.

TouchPlay machines were placed in convenience stores and other businesses across the state and generated some 30 million dollars in income before the Iowa Legislature shut them down in May of 2006.

“The new era vending machines that are available to lotteries today have that touch screen on them — it’s a monitor — it therefore meets the definition of a monitoring vending machine, which was TouchPlay when it was in operation here in Iowa,” Neubauer says.

Neubauer says the problem is with the technical definition of the machines. “It’s a very different machine, but it’s just that all the components in the machine added up together equal that TouchPlay definition,” 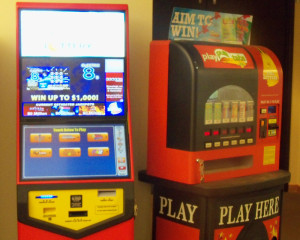 The new type touch screens on the left, could replace the older machine on the right.

Neubauer says. “So, we have requested to the governor’s office that we be allowed to file legislation this year to make it clear that the Iowa Lottery can continue to use these traditional vending machines.”

The TouchPlay machines generated controversy because of their similarity to slot machines. She says the legislation they propose leaves the TouchPlay prohibitions in place, but would allow the use of lottery self-service kiosks with vending machines to sell tickets.

“With TouchPlay it was a game that you played on a screen. You were playing on the screen — you were seeing the results on the screen of the game you played. This machine, you are simply using the screen to select a product from the machine,” Neubauer explains. 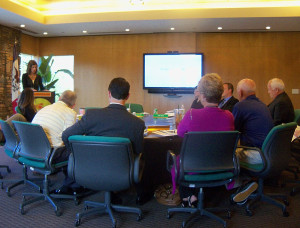 Pull-tab tickets are now sold exclusively through the vending machines and scratch tickets are sold in about 10 percent of the retail locations.

“On the scratch ticket side we estimate that we’ve sold probably 17 to 18 million dollars through vending machines per year. On the pull-tab side we sell 16 million dollars in tickets per year,” according to Neubauer. “So, those are significant numbers, both in terms of sales and the proceeds generated for good causes by those sales. We want to make sure that that revenue stream can continue.”

The lotttery’s current vending machines were purchased in 1991. Neubauer says the companies that make the machines have all switched to using the touch screen technology, just as many vending machines now use. “Whether it’s for a soda or a candy bar or to use the ATM or any number of things, to check in for your flight at the airport, it’s all touch screen technology,” Neubauer says.

The new lottery vending machines would take money and supply tickets, but they would not give out change. Neubauer says the machines are important for retailers in busy areas.

“They’re very expensive, so we don’t anticipate having them everywhere that lotttery tickets are sold. We would anticipate having them in our very busiest locations to be a supplement to the tickets that are already being sold at the counter. So, if there is a long line, somebody doesn’t have to stand in line to get to the counter, they can go buy a ticket from a vending machine,” Neubauer says.

The contract for maintaining the old push-button lottery vending machines expires in September of 2016. Neubauer says they are hoping the change in law will be approved in the legislative session in January so they can proceed to buy replacement machines.

Nuebauer made a presentation the issue with the touch screens during the Iowa Lottery Board monthly meeting.