You are here: Home / Agriculture / Apple crop booming this year in Iowa 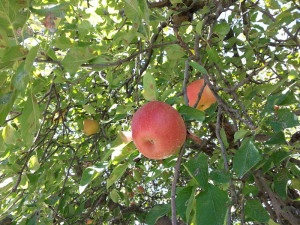 This summer’s hot and rainy weather helped produce a bumper crop of apples in Iowa. But, Bryan Etchen — who owns the Iowa Orchard in Urbandale — says a hard freeze during the blooming stage back in 2012 is likely a bigger factor in this year’s apple boom.

“When that happens to an apple tree, it starts to cycle and you have a heavy year the next year, which would be 2013. Then, in 2014, you may have an off year and in 2015, you have a heavy year again,” Etchen said. “Even though, as a commercial orchardist, we’re trained to thin the crop on a heavy year, you can never get it enough. It’s still going to be an enormous crop.”

Etchen notes the wet and humid conditions this summer were both a blessing and a curse. “It was going to be a heavy crop year anyway, but (the rain) makes for bigger apples,” Etchen said. “It also makes it more challenging — keeping diseases in check and insects in check.” There are nearly 1,000 acres of apple orchards in Iowa and they produce around 200,000 bushels of apples per year. Etchen says the best-selling apple is one that’s used primarily for cooking.

“I would say, in the state of Iowa, it’s Jonathan first and Honey Crisp is just behind it,” Etchen said. “Then, you’ve got apples developed at Iowa State University — Chieftain is really popular and Fuji is very popular.” Although apples started arriving back in July, Etchen says September and October are easily his busiest months of the year. “This is the peak season. This is right when Jonathan and Honey Crisp are ripe. Also, the cooler weather makes everybody think about apples and pumpkins and stuff like that,” Etchen said.

The bumper crop of apples this year may mean Iowans will pay a little less for the fruit. “Our prices in the sales room are a little bit lower this year than normal years,” Etchen said. Etchen’s father started the Iowa Orchard in 1975. Bryan Etchen has run the business since 1995. It’s now a 10,000 tree orchard with locations in Urbandale and Grimes.