You are here: Home / Fires/Accidents/Disasters / Book chronicles how Iowa City area residents handled the deaths of a mom and daughter 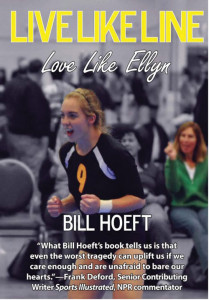 Sometimes triumph rises from tragedy and that’s the focus of a new book written by a Coralville man. Bill Hoeft spent four years doing interviews and research to compose the book: “Live Like Line, Love Like Ellyn.”

It’s the story of how many residents in the Iowa City-Coralville area were devastated by two deaths in August of 2011, starting with a crash that claimed the life of a 17-year-old girl.

“Caroline Found (who used the nickname Line) was killed in a single-vehicle moped accident and then 12 days later, her mother died of pancreatic cancer,” Hoeft says. “They weren’t the only ones devastated. The school and her volleyball team were as well. It talks about the good things that come from such a terrible tragedy.”

One focal point in the book is Ernie Found, a surgeon at University Hospitals who lost his daughter and his wife within two weeks of each other. Hoeft says Found is the type of person who, in his words, “makes me want to be a better man, a better father and husband.”

Hoeft isn’t an author by trade. He says his number-one job is being a stay-at-home dad. He’s also a Coralville city councilman. Initially, he balked at the idea of writing such a book, saying he’s “not good with death,” but the more he learned about the Found family, the more he was convinced he had to tell their story.

The book is available through the North Liberty-based publisher, Ice Cube Press, also at Barnes and Noble, Amazon and at Iowa City-area Hy-Vee stores.