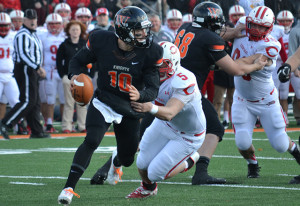 Fifteen of the last 17 Iowa Conference football championships have been won or shared by Wartburg or Central and the two league heavyweights collide in Waverly on Saturday. Defending champ Wartburg enters conference play with a 3-0 record and the Knights are ranked sixth in the latest D3football.com poll.

Wartburg coach Rick Willis says the games against Central over the years have been hard fought and close.

“Their defense has been very solid in all of their games and they had a huge win the last time out”, said Willis. “Basically it is just playing Central and the rivalry and knowing how big the game is. Typically these games have been pretty close.”

It is also homecoming at Wartburg and Willis says it should provide for a great atmosphere.

Central is 2-1 and the Dutch will be in search of their first victory in Waverly since 2009.