You are here: Home / Education / School bus rolls over in crash with SUV 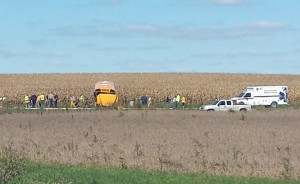 More than 30 students were on a bus that rolled over on a gravel road when it was hit by an SUV in northeast Iowa Thursday afternoon. None of the students, from the West Delaware Community School District, were seriously injured.

Iowa State Patrol officer Jon Stickney says it happened near Manchester when an SUV ran through a yield sign and struck the side of the bus. “It flipped the school bus over…it rolled over once, onto it’s side and back on to its tires where it came to rest,” Stickney said.

West Delaware Superintendent Dr. Kristen Rickey first went to the scene, then the hospital. “I communicated back to the school to send out a message through what we call ‘school messenger,’ which we can – within a matter of minutes – send an emergency message to all families in the district,” Rickey said. “Staff and parents got that message and were told right away which bus it was and where to come to pick up their children. So, that system worked very well.”

As a precaution, all of the students were transported to Regional Medical Center in Manchester. RMC Chief Nursing Officer Heather Ries was impressed with the students’ calmness and the parents’ patience. “The injuries could’ve been so much worse, I can tell you that,” Ries said. “We had some guardian angels watching over those students.”

The drivers of the SUV and the bus were also hospitalized.