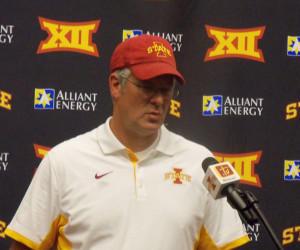 Iowa State woke up their offense in the second quarter and went on to a 38-13 win over Kansas in Jack Trice Stadium in Ames Saturday. The win evened the Cyclones’ record at 2-2. Coach Paul Rhoads says getting the win in the conference opener is key.

“Every game is important, whether it’s all 12 or in conference play. And every game is tough in this conference,” Rhoads says. “You watch K-U as the season goes on. And you watch them give people challenges, you’ve got to buckle it up every single game you play in this league.”

Rhoads says there are five teams in the conference that have been in the top 20 and that shows the strength of the league. “The other five can beat folks — and you’d better be ready to play every week. It’s a great league, it’s a challenging league, and you’ve got to coach it well and you’ve got to play it well,” Rhoads says. 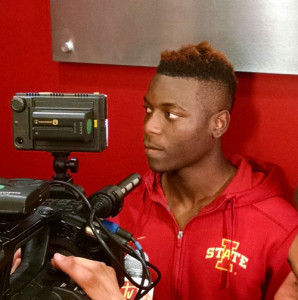 The Cyclones got 175 yards rushing and two touchdowns from redshirt freshman Mike Warren. Rhoads says Warren ran hard last year on the scout team and got attention, but is now going beyond that by reading and reacting as he runs.

“Mike Warren did not have to necessarily read fronts and timing and such, there was a card in the line that told him where to go and he ran as hard as he could in preparing our guys. That’s what he carried over into the spring and through fall camp. Now he is becoming a running back,” Rhoads says.

Warren says all the reads and things he needs to see are coming to him as he gains experience. “Yeah, it’s slowing down a lot because we practice it all the time, everything is moving in slow motion. Once I see it, then I just go, a full-speed decision,” Warren says. He had 126 yards rushing last week against Toledo, and says his confidence has continued to build.

“Our Toledo game, I went in with a lot of confidence and had a good practice, and I had a good practice the week after that in our bye week, and leading up to this game, even more so. It’s just kind of snowballed for me. Everything just feels natural when I am out there,” Warren says.

Cyclone quarterback Sam Richardson says Warren’s running helped open up everything for the offense, and led to a key win. “It was absolutely necessary after starting 1-2 in nonconference. We really had no choice but to start getting a little momentum here and winning some games,” Richardson says.

Richardson completed 27 of 37 passes for 269 yards and two touchdowns. He also ran for a touchdown.

Iowa State is now 2-2 overall and will travel to Texas Tech Saturday. Kansas falls to 0-4 overall and 0-1 in the conference.