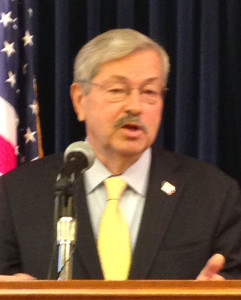 Governor Terry Branstad says he disagrees with the assertions his 2010 Republican Primary opponent is making about state money going to Planned Parenthood.

Bob Vander Plaats, a leading Christian conservative activist in Iowa, says Branstad is making “phony excuses” and failing to follow through on a 2010 campaign promise to “defund” Planned Parenthood.

“I just disagree with his legal analysis,” Branstad told reporters this morning during his weekly news conference.

Branstad pointed to Vander Plaats assertion several years ago that Iowa’s governor had the authority to undo the 2009 Iowa Supreme Court ruling that legalized same-sex marriage.

“He’s also the one that said…a governor could overturn a Supreme Court decision by an executive order and I think we all know that’s not true,” Branstad said. “And we’ve now seen the United States Supreme Court step in on that issue.”

Planned Parenthood does not get taxpayer money to cover abortion costs, but it does get reimbursed for providing other services to Medicaid patients, like annual reproductive health tests and breast cancer screenings. Vander Plaats said last week that a letter from Louisiana Governor Bobby Jindal “schools” Branstad on how to cut off that money to Planned Parenthood, but Branstad said Jindal has been sued for making that move.

The contracts that provide reimbursement to Planned Parenthood cannot be broken, according to Branstad.

“Unless we can show a violation of the terms of their grant, the attorney general has told us we don’t have any authority to do so,” Branstad told reporters this morning.

“I’m interested in working with the legislature on these issues, but I also respect the limitations on the authority that I have,” Branstad said.

The Family Leader has launched a “Keep Your Promise” ad campaign to pressure Branstad on the issue.