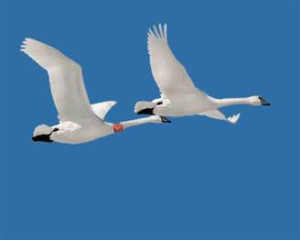 Two eastern Iowa duck hunters are facing stiff fines and penalties after they allegedly shot two trumpeter swans at a Scott County wildlife area over the weekend. One of the birds was killed, the other was badly wounded.

DNR Conservation Officer Jeff Harrison says he got calls Saturday morning from two sets of hunters reporting that the swans had been shot at Princeton Marsh.

“I was able to find the one swan that was dead already and I picked up shell casings at the scene,” Harrison says, “and then I located the other injured one but could not catch it.” Trumpeter swans are a protected species in Iowa and efforts have been underway for more than 20 years to boost their numbers in the state.

Harrison took pictures of the injured swan, which was bloody and had a broken wing. “Wildlife is going to attempt to catch it today at some point,” Harrison says, “and if they can get it caught, they’ll try to get it to a rehab center and see if it can be saved or if it has to be euthanized.” Saturday was the first day of duck hunting season in Iowa and Harrison notes, there are significant differences in color and size between common brown ducks and the nearly all-white trumpeters.

“The one that I did pick up, I didn’t weigh it but it’s probably close to 25 pounds,” Harrison says. “I’m six feet tall and if I hold it at the feet, level with my shoulder, the beak would touch the ground, so they’re substantially larger than any duck out there.”

If convicted, they’ll face a series of fines and penalties, including a civil penalty of $1,500 each in restitution. Three shotguns, their boat, motor and trailer were seized.