You are here: Home / Sports / Ferentz says consistency the key in B1G race 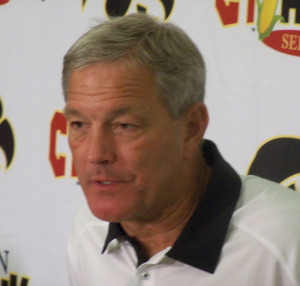 Iowa is off to a great start but coach Kirk Ferentz says to have a special season the Hawkeyes will need to be consistent. Iowa is 5-0 after a heart stopping 10-6 victory at Wisconsin and The Hawkeyes will host an Illinois team on Saturday that is also considered a surprise at 4-1.

“If we are going to be a successful football team and want to play in November in games that are really significant one thing we are going to have to do is have the ability to turn our attention quickly to our next opponent and another big challenge”, said Ferentz. “That’s really what conference play is all about.”

Interim Illini coach Bill Cubit took over the program a week before the start of the season and he has experienced success at Kinnick Stadium. His 2007 Western Michigan squad beat the Hawkeyes 28-19.

The Illini are coming off a 14-13 victory over Nebraska in their Big Ten opener.