You are here: Home / News / Gas prices still expected to drop yet this fall 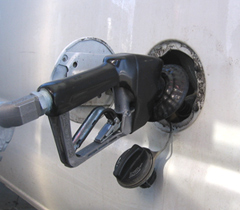 Iowans are paying a few cents more a gallon for gasoline lately, but market analysts say prices should be falling within a few weeks toward $2 a gallon. Gail Weinholzer spokeswoman for AAA Iowa, says this slight boost in pump prices is temporary.

Weinholzer says, “Currently, the average across the state of Iowa is $2.33 and that’s up about 2-cents from a week ago but still down about 14-cents from a month ago.” Refineries are in the process of switching from the summer grade of fuel to the winter blend.

“As we go through it, prices tick upwards just a little bit, but once we’re through it, by the end of October, we’ll see price relief in the form of about 20 to 25 cents,” Weinholzer says. “Iowa could approach $2 sometime between Halloween and Thanksgiving.” With summer vacation season well behind us now, she says gas prices often fall toward the holiday season.

“Demand declines during this time of the year and when the switchover is complete, after the 1st of November, typically prices will continue to decline right through the end of the year,” she says. “We should be near $2 for much of the last month or two of this year.” While Iowa’s current statewide average is $2.33 a gallon, that’s down from $2.47 a month ago and down from $3.15 a year ago.

The cheapest gas in the state right now is selling in Davenport at $2.21 a gallon while the most expensive gas is in Des Moines, averaging at $2.42.