You are here: Home / News / Leaders from Kosovo wrapping up visit to Iowa 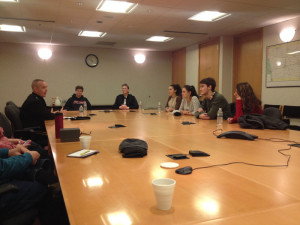 Members of the Kosovo delegation meet with the leader of the Iowa National Guard.

Five members of the Parliament of Kosovo are wrapping up a weeklong trip to Iowa. It’s a study mission where leaders from that Southeastern European nation are learning how accountable government works in Iowa.

“They’ve really been concentrating on looking at the different branches of government, how they interact with each other,” Heidemann says. “They really want to look at administrative rules, how they’re formulated, what the process is to actually pass those rules.” The delegates also met with Iowa Adjutant General Tim Orr as the Iowa National Guard has a partnership with Kosovo’s security force.

The group came to Iowa as part of the Open World Leadership Program. “This is going to give them ideas,” Heidemann says. “They’re going to go back and take these ideas, implement these ideas and truly change their government.” Besides the professional aspect of the program, members of the delegation are being hosted in private homes across central Iowa through an effort to further strengthen the relationship between Iowa and Kosovo.

“This is just one of many and we can expect many more,” Heidemann says. “We hope to have a consulate open for Kosovo very soon. We expect many more members of Parliament and high-level visits from Kosovo in the future.”

Other stops during the past week included: the Iowa League of Cities, the Greater Des Moines Partnership, the American Civil Liberties Union of Iowa, the Iowa Bar Association and the Des Moines Police Department. The group heads home tomorrow.