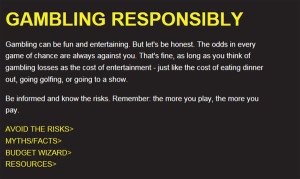 The 1-800 Betts Off website has information to help problem gamblers.

One site promises a $75 million payout to winners every week. Roxann Smith of the Jackson Recovery Centers in Sioux City says the ads talk about the big payouts for gambling, but don’t tell the other side.

She says the ads can get people to keep gambling as they tell about how much people are winning, but they don’t say how much people have paid in to get the money they win. Smith says she hasn’t seen a big increase in local sports betting problems this fall, but says there are people who are problem gamblers and the claims of big wins add to the temptation for them to gamble.

“Just the social influences, constantly seeing these things pop up on — whether it’s on their smart phones, or their tablets — that encourage them to participate in these things,” Smith says. It is not legal to participate in the on-line fantasy football contests in Iowa. The Iowa Senate passed a bill on the issue, but that is as far as it has gone in the state.

Smith says the ads for on-line gambling aren’t going away. “When it comes to on-line gambling, whether it be sports, fantasy, it’s one of the fastest growing on-line commerces in the world today,” Smith says. She says there’s an easy way to get help if you think you might have a gambling problem. You can call the 1-800-BETTSOFF hotline and find help in your area.