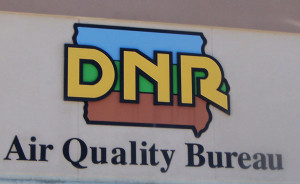 The Environmental Protection Commission voted Thursday to move ahead with proposed rules to establish air pollutant emission fees to cover the state’s cost of issuing construction and operating permits.

The Department of Natural Resources Air Quality Bureau the air quality bureau is funded with fees based on the amount of pollution generated.

The Iowa Legislature approved the new fees as officials say as emissions have gone down, so have the current fees. The commission met via conference call and heard from one person who had concerns about the proposed fees.

Mick Durham represented Grain Processors Corporation of Muscatine. “This proposed rule does not reflect any of the recommendations made by the shareholders group, which I participated in and spent numerous hours negotiating a reasonable solution for the Air Quality Bureau’s funding challenges,” Durham says. “The stakeholder committee recommended flat fees for multiple permitting scenarios, limited title five fee increases, and additional funding by the legislature.” He says the rules ask for a 25 percent increase in what are called the Title Five fees for air quality and establishes another fee to renew permits.

“The whole purpose of this rule was to resolve the Title Five fee issue. It is neither fair nor sustainable. This rule does not accomplish that goal, but instead makes it worse,” Durham says. He also questioned the table of potential hours to review a permit.

“The estimated hours to issue a construction permit provided by the Air Quality Bureau varies from eight to 200 hours. At a $115-an-hour, a permit could cost anywhere from $1,000 to $23,000. This is too large a range for our budgeting purposes,” Durham says. The chief of the Air Quality Bureau, Catharine Fitzsimmons, says they hour estimates were put together through the stakeholder groups. She says they found an estimated cost of a major source construction permit to be about $1,700 and a permit to prevent deterioration in a plant to be at around $2,700.

Fitzsimmons says the time it takes to review and approve a permit depends on the number of potential source points for the pollution.”Typically an average construction permit application took eight to 12 hours to complete — but we have many projects that take less time than that,” Fitzsimmons says. The Environmental Protection Commission approved moving ahead with the proposal and will take a final vote at its December meeting, with the hope the rules will go into place in January.