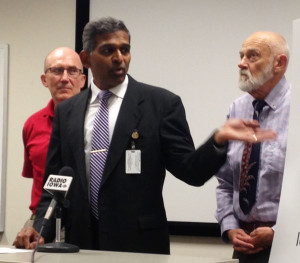 A group of almost 200 Iowa scientists, researchers and educators is urging Iowans to ask the presidential candidates what they’ll do to address problems associated with climate change.

Democratic candidates argue that human activity is causing climate change, but some Republicans reject that. David Osterberg, a professor in the University of Iowa’s Department of Occupational and Clinical Health, says the bottom line is “science says climate change is a reality.”

“That’s nobody’s view,” Osterberg says. “It’s good data and when you look at that good data, then it’s time, maybe, to begin making some policy based on it.”

Earlier this year, 188 Iowa scientists, researchers and educators from 39 Iowa colleges and universities released a “Time for Action” statement on climate change. The group has concluded “a warmer and wetter Iowa climate” is causing water and air quality problems. It’s also spawning the growth of super weeds that trigger more allergic reactions in humans. Those weeds are creating difficulties for farmers trying to keep their fields weed-free.

The three men spoke at the start of the third annual Iowa Climate Science Education Forum which is underway today at Des Moines University.

AUDIO of Shah, Osterberg and Swenson speaking at news conference

This afternoon, a University of Northern Iowa professor will present research with this title: “Why some members of the public are ‘immune’ to the evidence on climate change.”