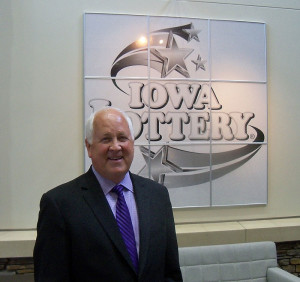 The insider convicted of tampering with lottery equipment to try to win a $16 million Hot Lotto jackpot five years ago is now accused of helping his brother and his best friend win jackpots from other state lotteries.

“It truly was a breach of trust and all roads seem to lead to Eddie Tipton,” says Iowa Lottery CEO Terry Rich, who is also the current president of the North American Association of State and Provincial Lotteries.

Tipton was the information security director for the Multi-State Lottery Association. A jury convicted Tipton on fraud charges in July and last month he was sentenced to 10 years in prison. Jim Saunders of the Iowa Division of Criminal Investigation says after that conviction, authorities got a tip Tipton had rigged drawings in other state lotteries.

“This is now a nationwide investigation that seeks to identify instances where individuals may have taken advantage of personal relationships to perpetrate fraud against a lottery game,” Saunders says.

Authorities are asking the public to come forward if they know of instances where someone who did not buy the winning ticket has been asked to claim a lottery prize in another state.

According to court documents, Tipton is already accused of rigging a Colorado LOTTO drawing in November of 2005. Investigators say Eddie Tipton’s brother, Tommy Tipton, asked a friend to claim a payout of more than half a million dollars from the Colorado Lottery. The former lottery security man is also accused of rigging a December, 2007 Megabucks Lotto drawing in Wisconsin that was claimed by a company owned by Eddie Tipton’s best friend. That best friend is facing charges in the 2005 case here in Iowa that sparked the investigation.

Tipton was never able to claim the Iowa Lottery’s Hot Lotto prize, as state law requires the ticket purchaser to reveal themselves to lottery officials, who have video of ticket purchases to confirm the player’s identity. Seventeen state lotteries used the computer technology Tipton helped create and control at the Multi-State Lottery Association. The Iowa Lottery’s CEO says “multiple, additional layers of security” have been added as a result of this case.

“It’s appalling to know that the person at the center of this case once worked at a vendor organization within the lottery industry,” Rich says. “This s breach of trust against lotteries, our players, our games and the billions of dollars at stake for the worthy causes that lotteries benefit.”

Tipton had been released pending the appeal of his fraud conviction. Tipton returned to Iowa from Texas today. He was booked into the Polk County Jail and then released on a $25,000 dollar bond. Tipton’s best friend, who is from Texas, has yet to go on trial on charges related to the Hot Lotto case.