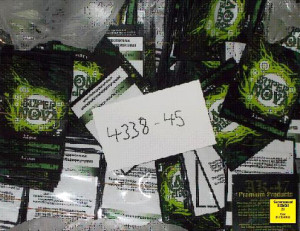 Court records indicate Watkins worked for Robert Sharp, who owned the Pipe Dreamz shop in Iowa City. He admitted to working with Sharp to package bulk materials into synthetic products commonly known as “Spice” and K-2. Sharp’s store, a storage area and the house where Watkins lived in Cedar Rapids were all raided.

Officers seized thousands of packages of the synthetic material and say they found a manufacturing area in Watkin’s home. Watkins faces a maximum of 20 years in prison and a $1 million fine once his sentencing has been set. Sharp pled guilty to the same drug charges and is also awaiting sentencing.