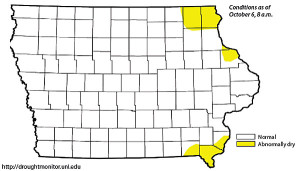 Some areas of the state got torrential rains near the end of September, but overall the state water report shows things looking pretty good as fall winds down. The Iowa DNR’s Tim Hall keeps track of the water situation.

“We’re kind of right where we’d hoped to be — a little on the wet side of normal, not overly wet — pretty good soil moisture going into the winter. So, actually it’s been a pretty good water year for the state,” Hall says.

The state tracks the subsoil moisture through the month of September as that’s when the opportunity to make a difference starts to end. “Generally after the ground freezes up, not so much frost, but once you get a good hard freeze, there really isn’t much opportunity for rainfall to soak into the ground,” Hall explains. “Now you can still get runoff into the streams and you still get some replenishment of the materials along the edges of the streams and rivers and obviously we can fill reservoirs — but in terms of overall general soil moisture — once the ground freezes up, the game changes a little bit.”

Hall says all 99 counties are drought free right now. “Just a couple tiny areas that are classified abnormally dry along the Mississippi River in northeast and southeast Iowa. But no areas that are even starting to approach drought conditions right now,” Hall says. Hall says farmers and others can feel good about the ground water levels as they work toward finishing their harvest and think about the new crop.

“It’s important to get the soil moisture into the ground going into winter. You like to sort of think about it as the fuel tank for water, you like to have the tank full going into spring just in case you end up with a dry spring. It’s nice to have a reserve of soil moisture in there to get things kick-started in the spring should things get a little drier,” according to Hall.

Hall says the whole midwest should be happy with the groundwater situation. “This whole region is in really good shape from a drought perspective. There’s almost no large areas of abnormally dry or early signs of drought in all the states that run around Iowa. So, regionally we’re in pretty good shape too,” Hall says. Hall says it wouldn’t hurt to have a little rain in some areas as the harvest comes to a close, as an added cushion.

For a thorough review of Iowa’s water resource trends, go to: www.iowadnr.gov/watersummaryupdate