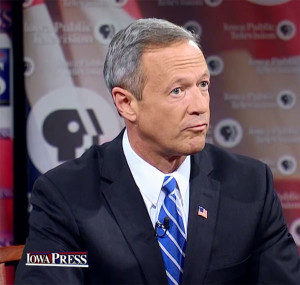 Former Maryland Governor Martin O’Malley says Tuesday’s debate among he and the other four Democrats seeking their parties presidential nomination is the “opening kick-off” of the campaign.

“By this time eight years ago, we had had nine debates so everyone had a sense of who the candidates were,” O’Malley says. “So, with the rather arrested development, it’s meant a rather late start to our season.”

During tomorrow’s debate, O’Malley is likely to bring up his long-standing opposition to the Trans Pacific Partnership trade deal.

“On the eve of the debate Secretary Clinton, apparently, has changed her position after advocating for it before and now she says that she is also against it. There are aspects of this deal like the ability of multinational corporations to actually sue our government to evade labor standards, to evade environmental standards and all of this is a blind rush for cheaper labor abroad,” O’Malley says. “I don’t think that helps our country.”

Last week during an interview with PBS, Clinton said the TPP did not meet the “high bar” in creating “good American jobs” and advancing national security.

“I think there’s a big difference between leading, between forging a new consensus and following a poll,” O’Malley says, “and I believe that what people are tired of in politics-as-usual are candidates that won’t be straight with us, that won’t tell us what the problem is, what the solution set is unless it’s poll-tested and the focus groups tell us it’s o.k.”

The latest poll in Iowa was conducted by NBC and The Wall Street Journal and it found O’Malley had the support of just three percent of likely Iowa Caucus-goers. O’Malley says voters in both political parties are “repudiating the establishment,” but he suggests voters are still “shopping” and haven’t settled on Donald Trump and Bernie Sanders.

“Neither party ever nominates angry,” O’Malley says. “…I know for people that have been following this race for a long time this may look like the final two minutes of the game, but I think this is actually the opening kick-off, so I’m looking forward to a debate where we actually discuss the ideas like debt-free college, raising the minimum wage, making wages go up rather than down, paying overtime pay for overtime work.”

O’Malley made his comments this weekend during an appearance on Iowa Public Television’s “Iowa Press” program. CNN is hosting Tuesday night’s debate. It starts at 7:30 p.m. Iowa time. While the Democratic candidates are preparing for that debate, Republican presidential candidates Ted Cruz, Bobby Jindal and Rand Paul are all campaigning in Iowa today.