You are here: Home / Crime / Courts / Rand Paul has 15 ‘Stand with Rand’ campus chapters in Iowa 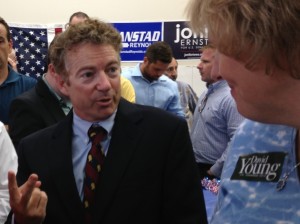 Republican presidential candidate Rand Paul will visit 11 Iowa college campuses this week. His campaign has a goal of signing up 10,000 college students in Iowa to support Paul in the Iowa Caucuses.

“We have 300 college campuses organized around the country, one in every one of the 50 states — 15 in Iowa,” Paul said during a news conference in Ames in September. “I mean, that’s a considerable amount of work and effort.”

Paul said his message on privacy issues and his call for “rehabilitation rather than incarceration” for non-violent drug crimes “resonates” with college students.

Paul’s father, Ron Paul, frequently held rallies on college campuses as he campaigned for president in 1988, 2008 and 2012. In mid-September, about 500 students turned out to see Rand Paul on the Iowa State University campus in Ames. The “Students for Rand” chapter at ISU is recruiting captains in each of the dormitories on campus as well.

“We are having a great resurgence or a great opportunity with young people coming together to form this campaign,” Paul said to start his remarks at ISU.