You are here: Home / Sports / Report: ‘Accidental mixed drug toxicity’ the cause of Tyler Sash’s death 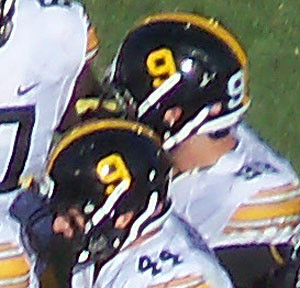 Iowa players wore helmets with Tyler Sash’s number 9 to honor him during this year’s game with Iowa State.

The State Medical Examiner’s Office has ruled the death of a former Iowa Hawkeye football star was accidental, due to a toxic mixture of drugs.

The medical examiner notes Sash had a history of chronic shoulder pain and had recently dislocated his shoulder. Both methadone and hydrocodone are prescribed to deal with pain, although the medical examiner’s report does not specifically mention that.

Sash played safety for the Hawkeyes for three seasons before being drafted into the NFL in 2011. He played two seasons before being cut from the New York Giants roster. His brain is being tested for CTE, a degenerative disease found in athletes, like football players, who have suffered repetitive brain trauma. The results of that test won’t be available for eight to 12 months.

Sash won a Super Bowl championship with the Giants in his rookie season. Sash was a first term All-Big Ten player in 2009 and 2010. Sash holds the Iowa Hawkeye record for interception return yards. He snagged three interceptions during Iowa’s 35-3 win over Iowa State in 2009.