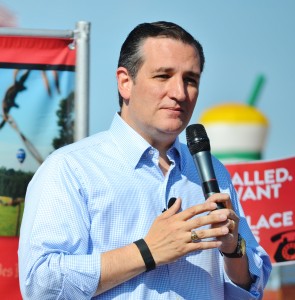 Republican presidential candidate Ted Cruz is campaigning in 11 Iowa cities this week, part of a new push as Cruz moves up to fourth place in recent Iowa polling.

“We’re playing the long game,” Cruz says. “We are running a campaign to win this campaign because our country’s in crisis and if we don’t turn back from the direction we’re going, we are going to lose the greatest nation in the history of the world.”

Cruz calls each of his supporters a “political entrepreneur”.

“You spread the fire of liberty just like you spread the gospel, one at a time, with a personal testimony looking someone in the eyes,” Cruz said. “That is the power of a grassroots campaign.”

This evening Cruz will host a 9:30 p.m. showing of the movie “War Room” at a theater in West Des Moines. It’s a faith-based movie and “War Room” is a reference to a closet one of the movie’s characters uses for prayer. Cruz campaigned in Burlington and Mount Pleasant last night. Today, he’s making stops in Kalona, Sigourney and Oskaloosa.