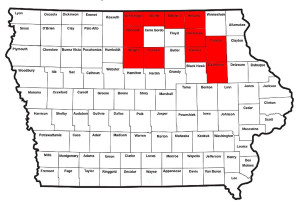 Counties under a burn ban shown in red.

“Just very, very dry conditions. The standing crops are dry, the grass is getting dry and drying down, and of course with the wind, everybody’s burning leaves this time of year and we’re hoping to get ahead of it a little bit,” Knecht says.

He also saw issues in other counties. “Around us there have been a few fires where combines have caught fire, so again, we just wanted to get a little ahead of it,” Knecht says. Knecht says people don’t always pay attention to the conditions when they burn.

“I think always their intentions are usually good, sometimes they want to get stuff done before they think a little bit,” he explains. He says with the burn ban in place it sends a message to not take any chances. Knecht says Howard and some of the surrounding counties have not had the rain needed to make conditions safer. He says it would take a pretty good rain to make a significant difference.

A fire in eastern Iowa destroyed around 2,000 acres of crops and two firefighters had to be treated for smoke inhalation. Knecht says even a small fire can get out of hand quickly. “Especially if there is some wind blowing, it’s gone in no time,” Knecht says.

The other counties joining Howard under a burn ban are: Hankcock, Winnebago, Worth, Mitchell, Chickasaw, Fayette, Wright, Franklin, Bremer, and Buchanan.