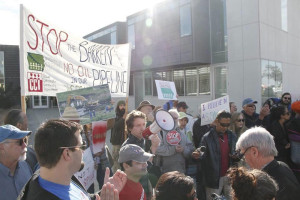 More than 80 people who oppose the Iowa route for the proposed Bakken oil pipeline protested outside the Iowa Utility Board’s offices today.

Iowa Citizens for Community Improvement organized the demonstration and brought a box full of letters with them.

“We have over a thousand objections to deliver to the Utilities Board to send a strong message to those board members that Iowans won’t stand for this proposal,” said Nathan Malachowski, an organizer with the group.

Mary Clarke of Norwalk used the group’s bullhorn to say oil is destroying the planet.

Kriss Wells of Davenport said the pipeline makes no sense.

“We’re not getting anything out of it,” he said. “The Texans are getting all the money and we’re taking all the risk.”

Dan Gannon, a farmer near Mingo, said if there’s a spill, the oil will wind up polluting the state’s groundwater supply.

“No amount of money will ever fix that,” he said.

The proposed pipeline would run diagonally through a 240-acre field on Gannon’s farm.

A handful of union members stood across the street from the demonstrators, holding signs in support of the project. They see it as a job creator. The proposed pipeline would ship oil from North Dakota to a refinery in Illinois. The Iowa Utilities Board is expected to decide in December or early January whether to allow the pipeline to be built through Iowa. Pipeline backers say the Texas-based company building the pipeline will pay nearly $30 million in property taxes in Iowa each year, plus another $60 million in compensation to affected landowners.