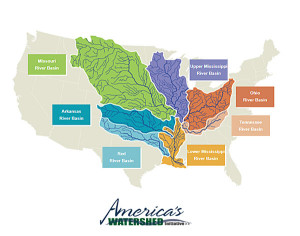 The Mississippi River basin is getting a D+ on a new report card issued by America’s Watershed Initiative. Mike Smith, a spokesman for the group, says aging infrastructure is the main concern.

Ten states, including Iowa, border the Mississippi. The condition of the locks and dams along the river is deteriorating. The report card was a “mammoth undertaking” over a two-year period, according to Smith. It involved the work of 400 organizations and 700 individuals including public officials, representatives of private industry and university researchers.

“In the past you never would have been able to put a database together like this and now you’ve got a real place to start, a real foundation where these allied interests can come together and collaborate as opposed to being in separate buckets and having individual interests whether they be agriculture or transportation,” Smith says.

The Mississippi River basin is the third largest in the world. Rivers and tributaries from 31 of the 50 states drain into the Mississippi.

The America’s Watershed Initiative report card raises concerns about the river’s ability to continue as a transportation hub for food, raw commodities and other goods. Most locks and dams were built in the 1920s and ’30s. The structures were needed to help vessels more easily navigate the Upper Mississippi. There’s a 420 feet drop in the river as it travels from the Falls of St. Anthony in Minnesota to St. Louis, Missouri.