You are here: Home / Agriculture / Vilsack urging collaboration rather than confrontation over water quality issues (AUDIO) 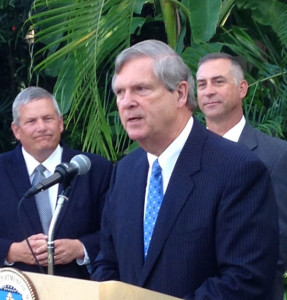 U.S. Agriculture Secretary Tom Vilsack is “strongly urging” the two sides in a water quality lawsuit to “create a forum” and discuss ways to resolve the dispute outside of the courtroom.

The Des Moines Water Works has sued three northwest Iowa counties, arguing farm chemical run off is contaminating drinking water. Vilsack said “folks who work the land” care just as much about water quality as those who live in cities.

“The best solution for the challenges we face is a collaborative, consensus, incentive-based solution,” Vilsack said.

The CEO of the Des Moines Water Works argues it’s time to abandon the voluntary approach to water quality when it comes to farming, because the levels of farm chemical contamination in the metro Des Moines water supply are growing higher. Vilsack said “complex factors…over a long period of time” have created the current situation.

Vilsack cited to his visit on Wednesday to Washington state, where environmental and conservation groups have been battling the timber industry in court for years.

“But they decided in Washington state that they had enough of conflict, that they were more interested in collaboration and consensus,” Vilsack said. “They decided that they weren’t going to get the movement, the protection of the forest, sustaining the timber industry unless they worked together.”

Vilsack said the U.S.D.A. “stands ready” to be part of a similar process in Iowa to find solutions to conserve our soil and make sure our water “is clean and usable.” Vilsack made his comments this morning during a news conference at the Des Moines Botanical Center.

Vilsack announced a $3 million federal grant to help restore prairie pothole wetlands in northern Iowa and tallgrass prairie areas in and around shallow lakes and marshes.

“This $3 million will allow us to essentially double the number of acress that will be involved in this effort from what we’ve done before and it joins over 14,500 similar investments we’ve made across the United States,” Vilsack said, “2.7 million acres now enrolled in this particular program nationally.”