You are here: Home / News / Sanders speaks in Iowa county that’s ‘as blue as you can get’ 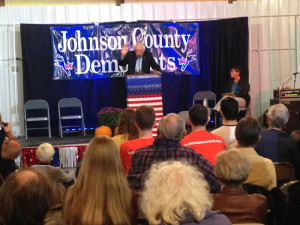 “We’re the only county (in Iowa) that has never, ever voted for Governor Branstad,” said Johnson County Auditor Travis Weipert, the guy who’s in charge of elections in the Iowa City area. “We’re as blue as you get.”

Sanders has appeared at nine events in Iowa City in the past year, including today’s repeat visit at the Johnson County Democrats’ October fundraiser.

“It goes without saying that I am here today to ask for your support to help me win here in Iowa, to help me win the Democratic nomination,” Sanders said.

Joe Marron of Iowa City was among those who got to the event early and waited for Sanders’ arrival. Marron considers himself a Democratic Socialist, just like Sanders. 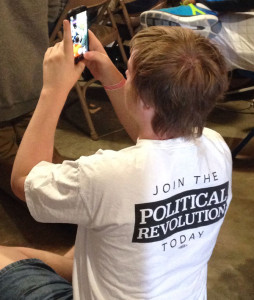 A supporter takes a picture of Bernie Sanders.

Marron was the Iowa Socialist Party candidate for Johnson County Auditor in 1982 and he doesn’t think Sanders will suffer from being labeled a socialist.

“If you don’t spend too much time talking about socialism, you talk about the issues, I think people are waiting for him on the issues,” Marron said.

“Hillary was really poised and practiced and did a real good job, but Bernie seemed more real and human,” said Kolsred, who was wearing a Bernie sticker today. “…I would say I have a lot of respect for Hillary, too, and her ability to convey all the information kind of made me a little more confused about who I would choose, but I’m still leaning towards Bernie.”

Mindy Russell of Iowa City watched the first debate, too, and thinks all five “did pretty well.”

“Really an intelligent debate,” she said after listening to Sanders’ speech, but she is not ready to choose a candidate.

Michiko Minoura of Coralville is a Sanders supporter and she thought Clinton was “gracious” when Sanders said during the debate that the country was tired of hearing about Clinton’s emails.

“There’s an impression out there that she will A. say anything to get elected and B. that she’s not trustworthy,” Minoura said. “I’m not sure how I feel about Hillary Clinton on those issues, but I will say that I will vote for her if she is the eventual nominee.”

University of Iowa student Liz Bonnett of Indianola took a selfie with Sanders this afternoon. She’s supporting him because Sanders says he’d raised taxes on the wealthy so students could get a tuition-free education at public colleges and universities.

“I feel like it’s very important because if I didn’t have a scholarship, I’d probably be taking out a lot of loans a year,” Bonnett said. “I’d probably be $40,000 in debt.”

Sanders stressed that issue during his 41-minute speech. Sanders also called for recalibrating the way the yearly cost-of-living increase is calculated for Social Security benefits. Under the current formula, there will be no cost-of-living adjustment next year.

“Seniors, by and large, spend their money not on flat screen TVs and computers, whose prices may be going down,” Sanders said. “They spend their money on health care and prescription drugs where prices are going up.”