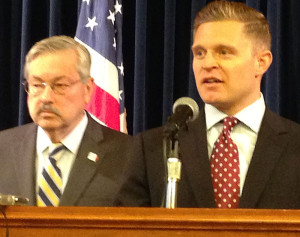 Governor Terry Branstad is defending the way his Department of Human Services estimated the amount of savings the state would get from hiring four private companies to manage the Medicaid program.

The chairman of the Iowa Senate Oversight Committee has asked Branstad to turn over the documents used to make that estimate. Reporters asked the governor about that request during his weekly news conference.

“First of all, I don’t have any,” Branstad said this morning during his weekly news conference. “This is the information that the Department…of Human Services has done forever. Michael, I don’t know if you have any more on this.”

Michael Bousselot is Branstad’s chief of staff and he told reporters the department worked with actuaries “who have been under contract for many years” to come up with a “prudent” savings estimate.

“Our office does not administer or oversee the Medicaid projections,” Bousselot said. “Rather that is handled by the Department of Human Services.”

Bousselot promised to “work with” legislators and reporters who’ve asked for any Department of Human Services documents used to make the savings estimate. Democrats in the legislature and advocates for the 560,000 Medicaid patients in Iowa as well as Iowa hospitals and health care providers have been raising concerns about Branstad’s decision to hire managed care companies to run the state’s Medicaid program.